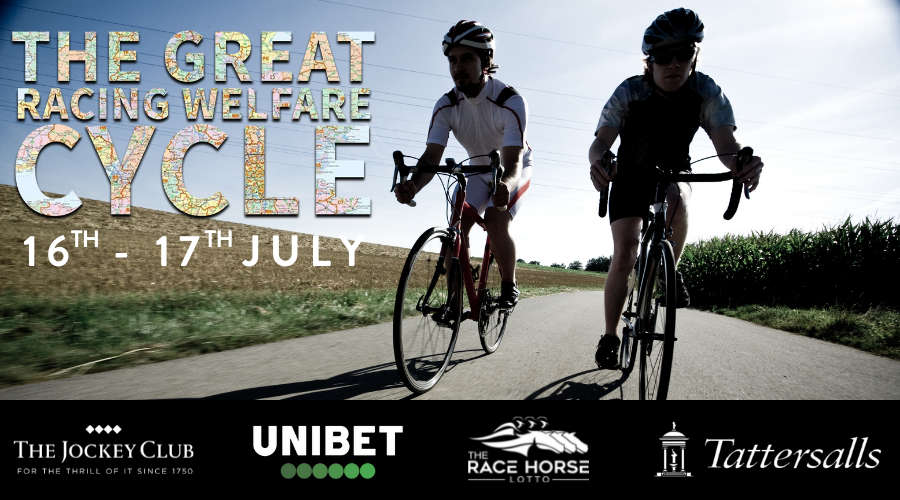 The racing industry is set to come together at Cheltenham racecourse once more – this time with an epic 24hr team cycling challenge, raising vital funds for the charity which supports racing’s people.

The Great Racing Welfare Cycle will start at 12 noon on 16th July, and complete at noon on 17th July. This challenge is based on a team of four people, with two out on the route cycling while two rest at the ‘Riders’ Camp’ at the racecourse.

The ride starts with a lap of the famous parade ring at Cheltenham, before heading out into the Cotswold Hills for an undulating, challenging 30km loop which includes climbing the imposing Cleeve Hill, with breath-taking views across Gloucestershire. On completion, a BBQ will be held to celebrate the incredible achievement of all of those who have taken part, along with their friends and family who cheered them home.

The challenge is open to all, and a whole host of racing staff and personalities have already confirmed their involvement, including champion jockey Oisin Murphy teaming up with presenter Matt Chapman.

Oisin Murphy said: “I’m not a very talented cyclist but I can get from A to B and it’s for a great cause so I look forward to taking part!”

Matt Chapman quipped: “Well, since I’m not chatting to Oisin on the track, I thought I might as well go and have a cycle with him to catch up! In all seriousness, it’s raising money for a great charity - Racing Welfare do a great job supporting people in the sport.”

Trainers Joe Tizzard and Ben Pauling are set to saddle up and field a team each, and presenter Luke Harvey is also stepping up to the plate. Among those who completed last year’s challenge and are coming back for more is former jockey and breaker / pre-trainer Charlie Poste of Station Yard Racing.

Importantly, four key sponsors have added their support to the challenge, with The Jockey Club, Tattersalls, Unibet and The Racehorse Lotto all generously committing to donate 25p for all the miles achieved by each team.

Ed Nicholson, Head of Racing at Unibet said: “Unibet is delighted to sponsor the Great Racing Welfare Cycle Challenge. Racing Welfare does a fantastic job of supporting the wellbeing of the racing industry’s current and former employees and their dependents, so it is particularly pleasing for me that Unibet can help raise awareness of the charity and this particular event, and most importantly, also raise much needed funds that will go to support many who work tirelessly to make our day at the races possible.”

Nevin Truesdale, Chief Executive of The Jockey Club, said: “This is a brilliant initiative and yet another example of the sport coming together to raise funds and awareness for our charity, which offers support to all of British racing’s people.

“We’re delighted to be pledging our support and donating and hope as many people as possible are able to contribute.”

CEO and founder of Racehorse Lotto, Hugh O’Donnell said: “The Racehorse Lotto is delighted to deepen our partnership with Racing Welfare and thrilled to be part of such a fantastic endeavour. We look forward to doing our bit from the sidelines and can’t wait to see how many miles are racked up by all those in lycra! It’s a fabulous event for such such an important cause and we wish everyone taking part the very best of luck.”

Last year’s renewal – in a different format over five days and 500 miles – saw over £85,000 raised in vital funds for Racing Welfare and it is hoped that this year can achieve even more to support people working in or retired from the racing industry.

To find out more and book your place, go to: https://racingwelfare.co.uk/challenges/the-great-racing-welfare-cycle/