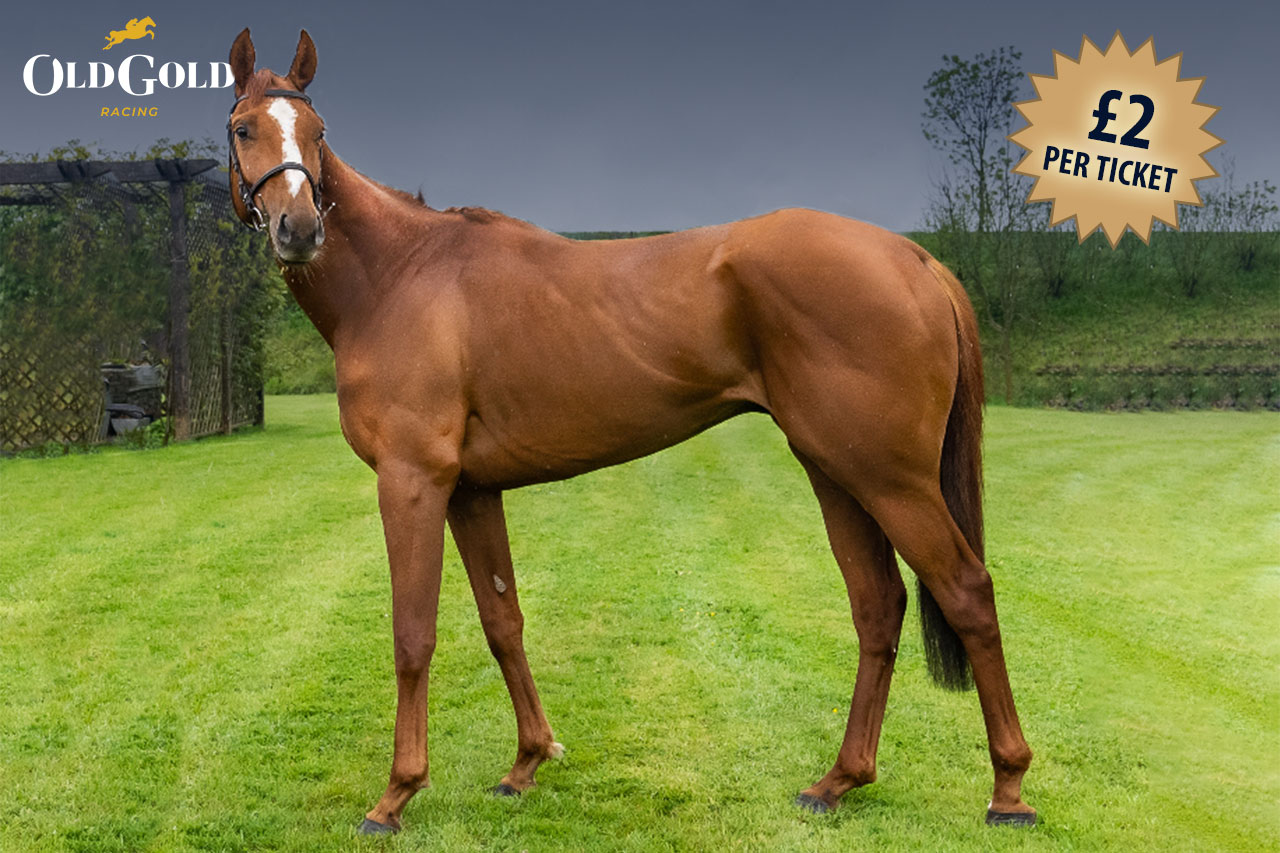 Henry Box Brown is a handsome 4-year-old, sired by Getaway and in training with Evan Williams.

He’s a magnificent stamp of a horse, standing at 16.1hh, with impressive paces and a scopey jump.

Henry Box Brown won his only under rules start to date , amassing £4,286 in an Irish National Hunt Flat Race. He won easily, without any fuss and with plenty left in the tank. Mr D Allen, his winning jockey, reported that he had a powerful engine.

He wouldn’t be described as a ‘typical’ chestnut, although strong-willed and fiery, he has shown a great attitude to his work, proving himself to be incredibly honest and willing.

Mr Williams has had a close eye on Henry Box Brown for quite some time. He produced an impressive performance in a hurdle schooling race in Ireland, catching the eye of Mr Wiilliams’ sister who then referred him. He was purchased by Evan Williams with Old Gold Racing owners in mind.

He is fit and ready to go. The plan is to send Henry Box Brown over hurdles from the end of June, continue his campaign through the Autumn and send him on holiday at Christmas when the ground becomes unsuitable.

Mr Williams believes that Henry Box Brown has the potential to make an exciting 130+ rated Saturday horse and insists he is not one to miss.

Mr Williams believes that Henry Box Brown has the potential to make an exciting 130+ rated Saturday horse and insists he is not one to miss.

You can read more about him here or in his handbook .

In aid of Racing Welfare, with 20% of every ticket purchased going to supporting the racing industry's staff during these difficult times.

Enter Raffle
Only250tickets available
Entry open until20/7/2021 (08:55)
1GuaranteedWinner!
This raffle will be drawn early if all tickets are sold before the draw date.

The raffle is now closed for entry

We are no longer accepting new entries in to the raffle. We will be conducting the draw soon so keep your eyes peeled on your email inbox to see when the lucky winning ticket will be shown later on today.

Thank you to everyone who has taken part and helped raise money for Racing Welfare.

Timing of the Prize Draw

The Prize Draw will take place on 19th July 2021, or earlier if all available tickets are sold before that point.

There are a total of 250 Raffle Prize Draw entries available for purchase.

Raffle Prize Draw entries are allocated a unique identifier upon purchase or processing of a postal entry.

If a postal entry is received before 1pm on 19th July 2021 but after all available entries have been sold/allocated then the entrant shall receive a credit to enter into the next available equivalent Raffle Prize Draw, or if no equivalent Raffle Prize Draw will become open for entry within a week of the postal entry being received then an entry into another Prize Draw on the Racehorse Lotto website with an equal or greater entry cost shall be awarded instead.

Eligibility to enter is limited to those who are at least 18 years old and resident in the UK.

No entries from agents, third parties, syndicated entries or those made using methods such as a computer macro, script or the use of automated devices are permitted and no bulk entries are permitted.

All entries received by 1pm (GMT) on the 19th July 2021 or the point when 250 entries have been sold/allocated (whichever is earlier) will be eligible for the Prize Draw.

Racehorse Lotto strives to support the racing industry during these very difficult times. To this end Racehorse Lotto will donate 20% of the purchase price of every Raffle ticket to Racing Welfare.

No donations will be made in respect of entries made using the alternative postal method of entry.

Racehorse Lotto does not claim ownership or affiliation with Racing Welfare, and its trade names, logos or intellectual property.

The portion of paid entry fees that will be donated to Racing Welfare will be made available on the Site.

The specific amount raised for and donated to Racing Welfare from the Raffle Prize Draw will be made available on the Site and Racehorse Lotto's social media channels after the Prize Draw has concluded.

The Winner ('The Winner') will receive four (4) shares in Henry Box Brown with Old Gold Racing, including a Gift of Gold Welcome Pack worth £255 total.

Ownership of these shares will be subject to Old Gold Racing's terms and conditions and procedures.

If for any reason not enough shares in Henry Box Brown remain available at the time the Winner would receive their prize, an equivalent number of shares in a different horse with Old Gold Racing will be provided instead, with an equal or greater value.

Delivery of the Prize

The Winner of the prize will be contacted via their registered email address and/or phone number if it has been provided to us to arrange for delivery to them. The Winner will not be liable for any postage costs or any other fees incurred in delivering the prizes to them. We may ask if the Winner would be willing to participate in a photo shoot with their prize for our promotional purposes. If the Winner agrees then we will deliver the prize to them at a date and time that we agree upon together. The Winner will in no way be obligated to do this. Racehorse Lotto reserves the right to substitute all or part of the prize with an alternative prize of equal or greater value where it is unable to provide the listed prize to a Winner. No cash prize alternative is available for the prize except where stated in these Terms & Conditions.

To the extent applicable, the period during which the Winner may receive the prize may be extended by: (i) the period that we consider that the event outside of our control prevented the prize from being provided to the Winner substantially in the form described; and/or (ii) the period during which horse races in England and Wales are conducted at racecourses that are closed to the public or otherwise the subject of enhanced entry restrictions.

No payment will be required from the Winner in order to receive the prize.

We may require proof of identity and to perform other checks prior to delivering the prize.

In the event that it is not possible for us to contact a Winner to arrange delivery of a prize after multiple attempts, then after a period not shorter than one month from the first attempted contact the prize will be deemed to be forfeited by the Winner and another winner will be determined randomly.

Racehorse Lotto and any affiliated parties, for example good causes recipients are not responsible for illegible, lost, late, incomplete, misdirected, or undeliverable email; or for any computer, telephone, satellite, cable, network, electronic or internet hardware or software malfunctions, failures, connections, or availability, or garbled, corrupt or jumbled transmissions, service provider/internet/website/use net accessibility, availability, or traffic congestion, or any technical, typographical, or other error, or unauthorised human intervention, or the incorrect or inaccurate capture of registration information, or the failure to capture, or loss of, any such information.

In the event of a dispute regarding entries received from multiple users having the same email account, the authorised subscriber of the email account at the time of entry will be deemed to be the entrant and must comply with these rules. Authorised account subscriber is the natural person who is assigned the email address by the Internet Service Provider (ISP), online service provider, or other organisation responsible for assigning email addresses.

The name and likeness of the Raffle Prize Draw Winner may be used by Racehorse Lotto or its affiliates for promotional purposes. This will be subject to the consent of the Winner. Where this consent has been given, the Winner will not be entitled to any further compensation for the use of this content in any promotional materials published on or offline.